The Intangible Zone is a spectacular refuge of carbon-rich, biologically-diverse rainforest that spans nearly 3,000 square miles (758,051 hectares) of ancestral Huaorani lands.  Roughly the size of Delaware and Rhode Island combined, The Intangible Zone is located in the Yasuni Biosphere Reserve, and has been designated by Ecuador’s government as a conservation area—off-limits to oil extraction, mining and logging—since 1999.  The designation is significant because Ecuador permits oil extraction in other protected areas, including Yasuni National Park and Biosphere Reserve, and in lands that are titled to the Huaorani (and other Indigenous peoples) without their consent.

But despite the protection on paper, The Intangible Zone and the Huaorani who live there continue to be threatened by encroaching oil companies, settlers and illegal loggers.

The Intangible Zone is home to the last known group of people still living in voluntary isolation in the Amazon Rainforest in Ecuador, a Huaorani family group known as the Tagaeri-Taromenani.  It is also home to three communities of “contacted” Huaorani: Bameno, Boanamo, and Wema.  The Huaorani (also spelled “Waorani” and “Waodani”) who live in Bameno, Boanamo and Wema understand that they must conserve and protect the rainforest in The Intangible Zone in order to survive and protect their culture and way of life.  They have organized themselves to work together, as communities, to protect The Intangible Zone and the right of their “uncontacted” neighbors to be left alone.  They call themselves Ome Gompote Kiwigimoni Huaorani, which means “We Defend Our Huaorani Territory.”  For short, they say Ome Yasuni. 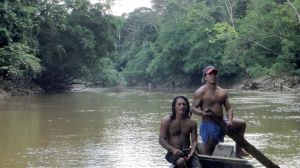 The importance of The Intangible Zone to the communities—and the reason why they oppose oil extraction there—was aptly described by Kemperi, a Huaorani elder and shaman who lives in Bameno, in a message to the peoples who live where the oil companies come from:

My message is that we are living here.  We are living bien (in a good way).  No more [oil] companies should come, because already there are enough.  They need to know that we have problems; I want them to comprehend what we are living.  Many companies want to enter, everywhere.  But they do not help; they have come to damage the forest.  Instead of going hunting, they cut down trees to make paths.  Instead of caring for [the forest], they destroy.  Where the company lives, it smells nasty; the animals hide; and when the river rises, the manioc and plantain in the low areas have problems.  We respect the environment where we live.  We like the tourists because they come, and go away.  When the company comes, it does not want to leave.  Now [the company] is in the habit of offering many things; it says that it comes to do business, but then it makes itself into the owner.  Where the company has left its environment, we cannot return.  It stays bad.  Something must remain for us.  Without territory, we cannot live.  If they destroy everything, where will we live?  We do not want more companies, or more roads.  We want to live like Huaorani, we want others to respect our culture.

Among other activities, the communities of Ome Yasuni are working to develop community-based alternatives to oil extraction and logging that do not damage the environment or disturb the Huaorani who live in voluntary isolation.  These alternatives include community-managed tourism (Huaorani Community Tours).   The communities are also involved in monitoring, educational, and advocacy activities to protect the Yasuni Rainforest and defend their human rights.